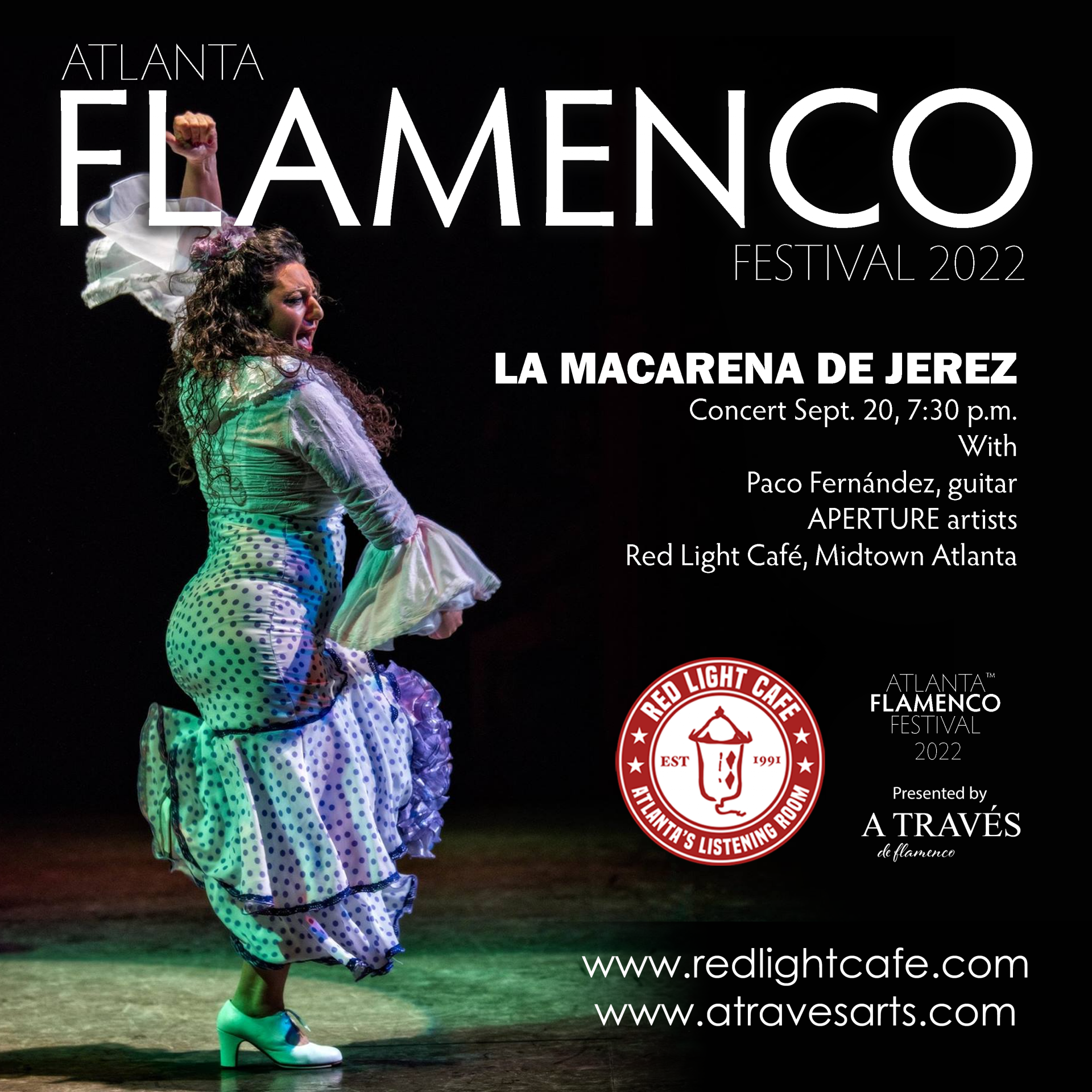 ABOUT THE CONCERT  Direct from Spain, the exceptional Macarena de Jerez visits Atlanta to perform flamenco singing and dance in the style of

Direct from Spain, the exceptional Macarena de Jerez visits Atlanta to perform flamenco singing and dance in the style of her hometown of Jerez de la Frontera. She is a festera – one of the only women in this role in the art form. In this role, she uses song and dance to create humor and excitement on stage. She will be accompanied by Paco Fernández on guitar, who learned the many aspects of flamenco while growing up in a family of artists in Seville, Spain. The two will be joined by participants of the APERTURE residency, a program to amplify flamenco arts in Georgia. Together, they present flamenco in its tradition of improvisation, building on the action and reaction by those on stage and in the audience.

Flamenco singer and dancer La Macarena de Jerez is one of the most well-respected artists in flamenco across Spain. She is known for singing the grand songs of the flamenco canon, as well as for being one of the few females in the role of festera – a character who uses song and dance to create humor and excitement on stage. She debuted on stage at age 10 at the famous Villamarta Theater in her hometown of Jerez de la Frontera, Spain. At 15, she performed her first solo concert at la Peña Los Cernícalos in the same city, and she was on stage in the important festival named the Bienal de Sevilla when she was 18 years old. She has since performed in major theaters and festivals across Spain and around the world. In addition, she has been recorded on flamenco albums, including Concierto Flamenco de Navidad (1995), Jerez Joven por bulerías (1996), and La Mujer y el cante en compás de origen (1999).

Flamenco guitarist Paco Fernández is part of a famous and important flamenco family in Seville, Spain. He began playing guitar when he was eight years old. His career as a performing artist developed alongside his sister, brother, and parents, all of whom are accomplished artists. Paco debuted on stage at age 12, and he toured Spain performing with his family at theaters and music halls. After that, he spent nearly a decade touring Europe, the United States of America, Japan, and India. He has performed with Camarón de la Isla, Antonio Núñez ’Chocolate’, Farruco, and other legendary and iconic artists of his time. He published his first album, entitled Sastipén Talí in 2005, collaborating with Dorantes, Diego de Morao, Potito y Antonio Fernández Montoya “El Farru”, as well as his siblings.

During the Atlanta Flamenco Festival, performing artists will offer residency classes for the cuadro on Sept. 9, 11, 12, and 21, and a public performance with residency participants on Sept. 20. People who love flamenco and have experience with the art form in dance, guitar, singing, and percussion (palmas, too!) should apply to participate in the classes and performance. During classes, participants will acquire a limited amount of material to unify them in a shared experience of music and movement. Then, they will apply that material in rounds of improvisation, with the goal of gaining new knowledge and skills of reacting and contributing to the interpretation of flamenco by themselves and their peers who. This happens by drawing from the new repertoire, existing repertoire, and experience in the art form. This is a residency for more advanced

ABOUT THE ATLANTA FLAMENCO FESTIVAL

While Atlanta has enjoyed concerts by world-class flamenco artists for decades, thanks to the work by theaters, such as the Rialto Center of the Arts, the Atlanta Flamenco Festival devotes a multi-week series solely to the art of flamenco, with the intent to deliver a variety of programming by a variety of artists, to the general public over a two-week period. Such a showcase will demonstrate the range of flamenco that is enjoyed in Spain and other major U.S. cities, during flamenco festivals that have been in production for over 20 years. This festival not only brings an influx of flamenco artists to Atlanta, but it provides an anchor for this art form in the South, as no other city in this region presents a flamenco festival.

The Atlanta Flamenco Festival will provide arts and culture programming to enhance the knowledge of people of all ages in metro-Atlanta so that they may experience new perspectives in flamenco, Spanish history, U.S. Civil Rights, and personal emotional expression.

In 2022, the festival features two performances by Isaac Tovar and his company on Sept. 10, 2022, and another performance by La Macarena de Jerez on Sept. 20, 2022. Artists will also teach classes while in Georgia. Details are at http://www.atravearts.com.

The Atlanta Flamenco Festival is presented by A Través, which is the only 501c3 in Georgia that is dedicated 100% to flamenco arts. We hire primarily Spanish artists in our projects, and we insist that they work in small groups, with audiences, including students in classrooms and concert attendees in theater seats, so that the experience of working with a person who hails from another place in the world may open the mind to new perspectives and the accompanying increase in creativity.

Unlike most American flamenco organizations, which promote a singular interpretation of flamenco under their own artistic vision, A Través taps a pool of professional artists, who can communicate the range of flamenco that exists today and a lifetime of cultural expression, in addition to dance steps or a song lyrics. That sharing of lifestyle is essential to understanding flamenco, but more importantly to growing creativity on both sides of the interpersonal connection. Understanding how problems are approached in other cultures, including in math, science, and every-day life, provides people in the U.S.A. with opportunities to develop new problem-solving skills at home. They also learn about the history of Spain, which formed some of the founding ideology of the U.S.A. In these ways and more, flamenco opens opportunities for Americans, and it is our purpose to help people see the art form beyond its stereotype.