25jun3:30 pm4:30 pmBelonging and Community: A Conversation on Atlanta, Art & Connections with Bill T. JonesCome together for a conversation about community! Register early to submit questions in advance and get a direct link to the Facebook live stream. 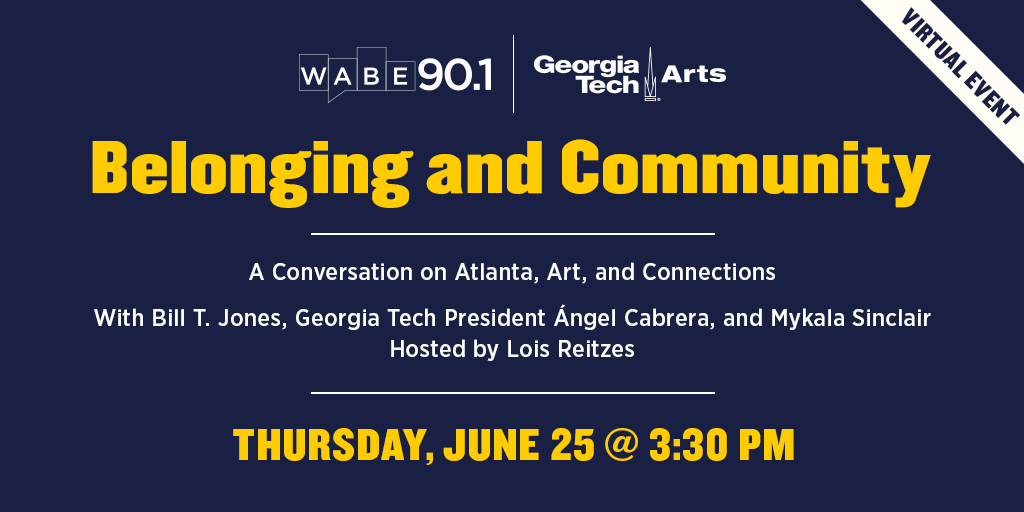 Georgia Tech Arts in partnership with WABE & ATL PBA present a virtual town hall discussion with renowned choreographer Bill T. Jones that explores the importance of community when facing the sense of isolation and divisiveness present in society today. Jones will be joined by Georgia Tech President Ángel Cabrera and Georgia Tech student Mykala Sinclair, with the conversation moderated by Lois Reitzes, host of WABE’s “City Lights.” Together, they will examine questions probing the ways in which we all have felt isolated before and during this pandemic; how we can come together and create a sense of community, of belonging; and how art can help us to imagine a new future of connections. This event is free and open to all. Register today to submit questions ahead of time!

Long before the pandemic, Jones was exploring this concept of community while developing a new work titled What Problem? that is inspired by the Rev. Dr. Martin Luther King, Jr. and the character of Pip from Herman Melville’s Moby Dick. It is an adaptation of Deep Blue Sea made for a proscenium performance. Georgia Tech Arts will present What Problem? at the Ferst Center for the Arts in October, and it will also include opportunities for professional and novice performers from the Atlanta community to participate in the production along with the Bill T. Jones/Arnie Zane Company members. Visit https://arts.gatech.edu/content/what-problem to learn more about their performance at Georgia Tech Arts.

About Bill T. Jones
Bill T. Jones is a multi-talented artist, choreographer, dancer, theater director, writer, artistic director/co-founder of the Bill T. Jones/Arnie Zane Company, and artistic director of New York Live Arts. He has received the Human Rights Campaign’s 2016 Visibility Award, 2013 National Medal of Arts, a 1994 MacArthur “Genius” Award, and Kennedy Center Honors in 2010. Mr. Jones was also honored with the 2014 Doris Duke Performing Artist Award, recognized as an Officier de l’Ordre des Arts et des Lettres by the French government in 2010, inducted into the American Academy of Arts & Sciences in 2009, and named “An Irreplaceable Dance Treasure” by the Dance Heritage Coalition in 2000. His ventures into Broadway theater resulted in a 2010 Tony Award for Best Choreography in the critically acclaimed musical FELA!, which he co-conceived, co-wrote, directed, and choreographed. He also earned a 2007 Tony Award for Best Choreography for Spring Awakening, as well as an Obie Award for the show’s 2006 off-Broadway run. His choreography for the off-Broadway production of The Seven earned him a 2006 Lucille Lortel Award.

About Ángel Cabrera
On Sept. 1, 2019, Ángel Cabrera became the 12th president of the Georgia Institute of Technology. Cabrera came to Georgia Tech after serving for seven years as president of George Mason University. From 2004 to 2012, Cabrera served as president at Thunderbird School of Global Management, now part of Arizona State University. Prior to that he was dean of IE Business School in Madrid. As a business educator, Cabrera has played a key role in advancing professional ethics, internationalization, and corporate social responsibility. As a senior advisor to the United Nations Global Compact, in 2007 he was the lead author of the “Principles for Responsible Management Education,” now adopted by more than 700 schools around the world. He’s been named a “Young Global Leader” by the World Economic Forum, a “Star of Europe” by Businessweek, “Henry Crown Fellow” by the Aspen Institute, and “Great Immigrant” by the Carnegie Corporation of New York. Cabrera earned his M.S. and Ph.D. in cognitive psychology from Georgia Tech, which he attended as a Fulbright Scholar. He also holds a telecommunications engineering degree (B.S. and M.S. in computer and electrical engineering) from Universidad Politécnica de Madrid.

Mykala Sinclair (she/her) is a rising 6th-year Mechanical Engineering student minoring in Industrial Design. She started as a general member of Art Matters, a student collective focused on the art movement at Georgia Tech, and now serves as President of the organization. Mykala also serves as Vice President of Student Life within the Student Government Association (SGA). In her role as VPSL, she governs four committees: art, athletics, health and well-being, and cultural and diversity affairs. Mykala works through her channels of involvement and with her teams to foster a more equitable and inclusive environment at Tech. In her free time, Mykala works on her art projects of mixed varieties. Her current ongoing project focuses on black mental and emotional health.

The distinctive voice of Lois Reitzes has been heard over WABE’s airwaves since 1979. From 1982 to 2015, Lois hosted the weekday morning program “Second Cup Concert,” which can now be heard on the WABE Classics HD channel. Since January of 2015, Lois has hosted “City Lights with Lois Reitzes,” a ground-breaking weekday arts and culture program with a specific mission of elevating Atlanta’s arts scene. In addition to “City Lights” and “Second Cup,” Lois produces and hosts WABE’s Atlanta Symphony Orchestra broadcasts and “Spivey Soirée” series. She served as Program Director from 1992-2007, and became Director of Arts and Cultural Programming in 2007. Lois pursued graduate study at the Indiana University School of Music in Bloomington.