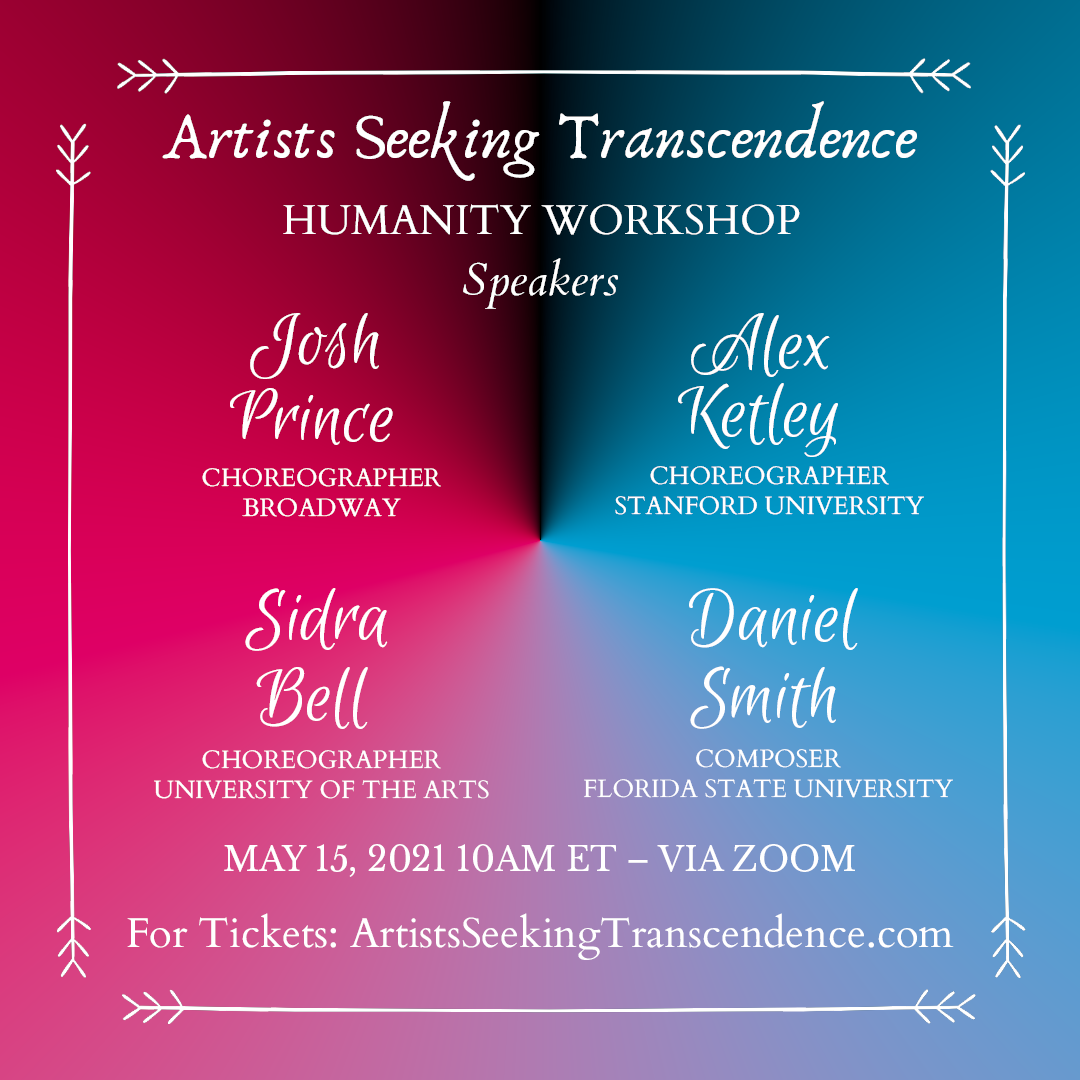 Who do we care about? How does our sphere of concern impact our art? Can we love those with whom we disagree? Should we? This four-part online workshop invites attendees

Who do we care about? How does our sphere of concern impact our art? Can we love those with whom we disagree? Should we? This four-part online workshop invites attendees to join in a discussion about care, kindness, and community in relation to artists, their art-making processes, and their training.

Josh Prince has appeared on Broadway in Little Me and Saturday Night Fever, made his Broadway choreographic debut with Shrek, The Musical (Outer Critics Circle Nomination) in 2006, and is the proud choreographer of the award-winning hit Broadway show, Beautiful – The Carole King Musical (Olivier, Helpmann, and Astaire Award nominations), which ran for six years at the Stephen Sondheim Theatre and toured the US, UK, Japan, and Australia. He has choreographed shows at prestigious venues across the US and UK, including New York City Center, Carnegie Hall, Lincoln Center, The Kennedy Center, BAM, and The Royal Albert Hall. Additionally, Josh is the founding Artistic Director of Dance Lab New York, an organization dedicated to promoting and providing resources to a diverse range of dance makers.

Alex Ketley is a choreographer, filmmaker, educator, and the director of The Foundry. In his 20 years making work, he has developed pieces from many different creative entry points. Examples of these are: Syntax, an hour-long duet that used the mechanics of language as an organizing mechanism; Lost Line researched how the application of environment affects the generation of movement; Please Love Me jettisoned performing in a theater and researched how people connect and experience artwork; and the No Hero Trilogy was a multi-year project that explored what dance and performance means to people living throughout rural America. He has been commissioned extensively throughout the United States and has received acknowledgement from the Hubbard Street National Choreographic Competition, the Choo-San Goh Award, the Princess Grace Award for Choreography, four MANCC Residencies, the Eben Demarest Award, the National Choreographic Initiative Residency, a Kenneth Rainin Foundation New and Experimental Works Grant, a Phyllis C Wattis Foundation Grant, the Artistry Award from the Superfest International Disability Film Festival, and his work was featured on the show So You Think You Can Dance. His pieces and collaborations have also been awarded Isadora Duncan Awards for outstanding achievement in the categories of Choreography, Company, & Ensemble. He is a Lecturer at Stanford University’s Theater and Performance Studies Department, and in 2020 he became a Fellow of the John Simon Guggenheim Memorial Foundation, one of the most prestigious honors in the United States recognizing individuals ”who have demonstrated exceptional creative ability in the arts.”

Sidra Bell is currently a Master Lecturer at the University of the Arts in Philadelphia, was artist in residence at Harvard University, and was an Adjunct Professor at Barnard College in New York City. She has a BA in History from Yale University and an MFA in Choreography from Purchase College Conservatory of Dance. Her body of work was featured in the Harvard University Theater, Dance & Media course Contemporary Repertory: Dance Authorship in the 21st Century. She has received many commissions from institutions and companies internationally and created over 100 new works notably for BODYTRAFFIC, Ailey II, The Juilliard School, Harvard University, Boston Conservatory, NYU Tisch School of the Arts, Sacramento Ballet, Ballet Austin, Alonzo King’s LINES Ballet School. Bell was a cultural ambassador in Sofia, Bulgaria in 2014 and 2015 (made possible by Movement Research, Trust for Mutual Understanding, and Derida Dance Center). In 2015 she collaborated with the internationally acclaimed women’s chorus Karmina Slovenica in Slovenia. She is the first Black woman ever to create a new work for New York City Ballet.

Daniel Smith, the Director of AST, is an acclaimed pianist and composer best known for his work with leading dance institutions, including Martha Graham Dance Company and Suzanne Farrell Ballet. He is a faculty member at Florida State University where he teaches cross-disciplinary courses that merge philosophy, science, and the arts.

(All times are Eastern Time Zone.)

AST provides online workshops and master classes for artists that integrate philosophy, science, and aesthetics. Each of our events explores one of six core character attributes: happiness, wisdom, courage, humanity, justice, and temperance. We investigate leading philosophical and scientific understandings of these virtues and mentor artists as they wrestle with rich, enduring questions in the pursuits of bettering themselves and expanding their capacity to make impactful art. Our workshops and master classes are held online via group video chats (NOT webinars), allowing you to see and talk with us, our guests, and other participants from anywhere in the world. If you’re involved in an arts-related field and want to engage with passionate, insightful speakers and guest artists, you’ve come to the right place!